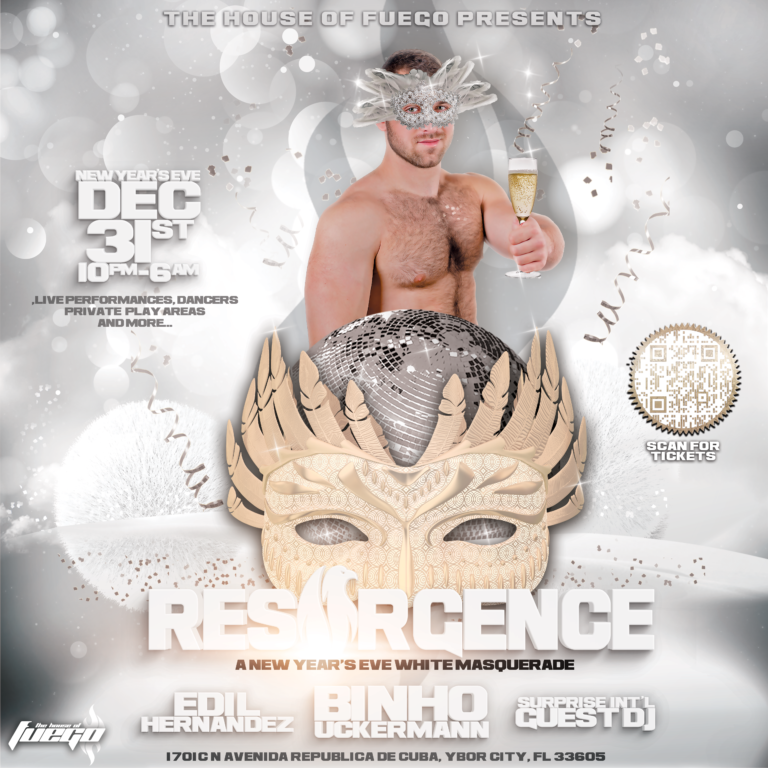 Although we’ve had a few events in Tampa and Saint Petersburg in 2022, The House of Fuego undergoes a renaissance, kicking off the 2023 year with a weekend of events for New Year’s Weekend, with its first event appropriately named Resurgence, like a phoenix from the ashes.

Join us at a brand new location we’ve partnered with in Ybor City, name is still yet unknown as they are going through renovations, located just south of Southern Nights, as we kick off the New Year with a night of great music, live performances, and more. This is a white-themed masquerade, so come dressed in white, silver, or gold. Masquerade and white attire is optional, but highly-encouraged.

We’ll kick off the night with beats provided by Ember and Southern Nights Orlando resident DJ, Edil Hernandez, originally hailing from Puerto Rico. During the pandemic in 2020, Edil partnered with us, alongside DJ Nina Flowers, for our event Encanto, a livestream event paying homage to Puerto Rico, La Isla del Encanto.

There will be countdown, followed by a ball drop, champagne toast, and performance at midnight, after which Brazilian DJ, Binho Uckermann, will take over. Be prepared for hign-energy beats guaranteed to keep you dancing the night away.

At 3am, a surprise, international DJ will take the reins and lead us on a high-energy, tribal journey to close out the night. Details on the surprise DJ will be announced the day of the party to ticket holders only, so if you want to know, you’ve got to go. *wink*

Below, you’ll find a sample set from both Edil and Binho.
There will a clothescheck and Private Play areas for you to take advantage of — until 6am!


Tickets on sale — get yours now!
get Tickets
Prevprevious
nextNext